This blog is hosted on Ideas on Europe

On 6 April Dutch citizens can cast their vote on the Association Agreement (AA) between the EU and Ukraine. The referendum has been at the centre of the public debate over the past couple of months for a number of reasons. First, the referendum is the first organised under a new referendum law. Second, Ukraine has become a divisive and emotional topic in the Netherlands, and many people are faced with a dilemma when asked to vote on this issue. Indeed, from Euroscepticism and Putin to helpless politicians and toilet paper, the AA referendum has brought a host of issues to the centre of the debate.

The Association Agreement and the new referendum law

The AA is a new agreement, signed in 2014, that facilitates bilateral economic and political cooperation between the EU and Ukraine. There are numerous AAs already in place with other states across the globe (Chile, Morocco, and Macedonia, to name a few). AAs do not foresee a perspective on EU membership but are a way of regulating widening co-operation between the EU and third countries. Most parts of the AA with Ukraine have already come into force on 1 January, but before the political dimension can be implemented the Member States need to give their consent.

A referendum on such an issue is a new phenomenon in the Netherlands. In July 2015 a new law was adopted that enables a national referendum if 300,000 signatures are collected in favour (which equals 2,3% of the Dutch electorate). Shortly after, the GeenPeil initative, connected to the populist website GeenStijl, decided to request a referendum on the AA with Ukraine and managed to obtain sufficient signatures (472,849). The referendum is not legally binding but since it arouses heavy sentiments and debates within the country, it would be hard for the government to ignore the outcome. According to the latest polls, 37% are in favour of the AA and 50% against, while it appears that the turnout will be above the threshold of 30% for the referendum to be valid.

The debate over the referendum brought to the fore a choice between what many Dutch see as two evils. On the one hand, it is argued that a ‘no’ will in effect reward Vladimir Putin for his reckless foreign policy, or worse, embolden Russia to encroach on the sovereignty of other neighbouring states. This argument has a particular resonance in a country that less than two years ago saw 193 citizens traveling on Flight MH17 shot down over Eastern Ukraine by separatists, allegedly equipped with a Buk missile system supplied by Russia. Unsurprisingly, this national trauma has made the public debate over both Russia and Ukraine highly emotional. Indeed, a central argument of the ‘yes’-campaign is that a vote against the AA constitutes a ‘vote for Putin’, leading the Financial Times to conclude that ‘it has become a referendum on a completely different issue: Vladimir Putin’. 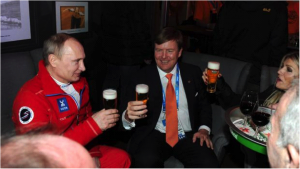 Happier times for the Russian president and the Dutch king and queen, who are seen enjoying one of the Netherlands’ better known beverages at the Sochi 2014 Winter Olympics as the protests in Kiev descend into chaos. Source: volkskrant.nl.

On the other hand, a ‘yes’ is portrayed as a stepping stone towards EU-membership for Ukraine, a prospect the majority is not particularly keen on in the current political context. Although the Association Agreement does not mention membership, many Dutch have come to profoundly distrust the Brussels’ elite, which they see as hiding their true intentions. In 2005, the Dutch public had already expressed a similar sentiment when it voted against the EU constitution in another referendum. In addition, considerable doubts have been voiced as to whether Ukraine – a country embroiled in a civil war, engaged in a territorial dispute with its powerful neighbour, ruled by nationalists and oligarchs, and deeply mired in corruption, nepotism, and economic crisis – truly constitutes the ideal partner for trade and reform that proponents of the AA make it out to be. Lastly, Harry van Bommel of the Socialist Party (SP) has argued that the AA “will absolutely lead to more tension with Russia and that is in nobody’s interest”.

Anticipation and campaigning in the Netherlands

The Dutch seldom get carried away over political issues: major debates, strikes, or protests are rare. Yet this referendum has, so far, generated much attention.  This is remarkable in view of the fact that other issues that have had far greater consequences for Dutch citizens went by almost unnoticed, a case in point being the abolishment of student grants in 2014. 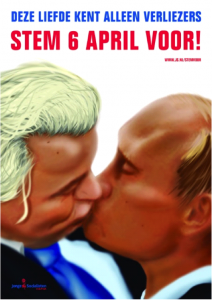 “This love only knows losers. Vote in favour on 6 April!”. Pictured are the PVV’s leader Geert Wilders (left) and Putin (right). Poster by the youth association of the Dutch labour party.

The positioning of the different parties has, to a large extent, reflected a cleavage over Europe. Thus, the ‘yes’-camp is headed by the governing parties PvdA (labour) and VVD (liberal), and enjoys the support of D66 (social-liberal), CDA (Christian democrats), and GroenLinks (green), whereas the SP (left) and the PVV (populist right) head the ‘no’-camp. Indeed, to the extent that the AA is perceived to be at least as much about Europe itself as it is about cooperation with Ukraine, the referendum has become a means of reaffirming one’s Eurosceptic or Europhile credentials.

For instance, Geert Wilder’s PVV has called on voters to vote against the AA, arguing that “a vote against the agreement also means a vote against Rutte [prime minister, ed.] and the Brussels’ elite” while D66’s campaign slogan reads “a strong Netherlands in a strong Europe”. Apart from D66 and the SP, most parties have been reticent to engage themselves too much in the debate.

The campaign has been stirred by a number of incidents. The new referendum law provides for a maximum of two million euros of subsidies to be distributed amongst proponents, advocates, and neutral parties to foster public debate on the referendum. The allocation of these subsidies has attracted considerable criticism, with one man receiving almost 50,000 euros for the production and distribution of 100,000 toilet rolls with arguments against the AA.

Meanwhile, the leader of D66, Alexander Pechtold, failed to declare to the parliament that he had accepted an offer of being flown with a private jet to Ukraine in February. The event garnered the attention of the public as it turned out that Pechtold’s benefactor was a Dutch entrepreneur with sizeable interests in Ukraine. Furthermore, the American billionaire and critic of Putin George Soros, head of the Open Society Foundations, has financed the ‘yes’-campaign to the tune of 200,000 euros.

While the referendum has so far generated little attention in European media, the outcome of the ballot clearly has a broader international dimension. The Netherlands is currently holding the EU rotating Presidency and the government seems to take pride in the achievements of the past three months of its chairmanship. A rejection of the AA by the Dutch people, however, would be a flop for the governing coalition – even if the government is not legally bound to the referendum’s outcome.

The Dutch vote also points to the growing role of referenda in European politics. Indeed, as the Brexit referendum takes centre stage in the British and European debate, it remains to be seen what the precise consequences of more direct democracy will be for the future of the EU.

It is unclear whether the referendum may constitute a stumbling block for the AA, or if this is a typical case of “much ado about nothing” Whatever the outcome may be, the vote is not binding and while the Dutch government has stated that it will respect the popular vote, it is unlikely that the coalition will actually ask for a re-negotiation of the deal, considering the Netherlands’ current EU Presidency.

Moreover, can – and should – a third of the electorate of a small country like the Netherlands really change the direction of relations between the EU and Ukraine? The organisers of the referendum seem to have suggested to their audience that it would actually have any influence on the implementation of the AA, while this remains to be seen. But if this would be the case, one may question whether the fact that a few million Dutch are able to fundamentally influence European policymaking truly constitutes the pinnacle of democracy.

No matter what the outcome of Wednesday’s vote will be, the referendum has already proven its importance. The issue has stirred up much debate in an otherwise politically passive country, and the referendum will be a significant step for Dutch democracy. The question remains how a ‘no’ vote will affect dynamics within the EU, and most importantly, what the consequences for Ukraine will be.

View all posts by Camille-Renaud Merlen →

UACES and Ideas on Europe do not take responsibility for opinions expressed in articles on blogs hosted on Ideas on Europe. All opinions are those of the contributing authors.