Turkey has, for unfortunate reasons, been covered extensively in the news over the past weeks. There appears to be consensus in Europe that neither political coups, nor subsequent mass repression, are acceptable. Moreover, the crackdown after 15th July is only the last item on a long list of measures taken over the past years which would have made Kemal Atatürk revolt. But the AKP leadership does not seem very impressed by negative media coverage or foreign condemnations, and even seems to be challenging the EU. One of the questions therefore is: how should the EU react, and can relations with Azerbaijan perhaps provide an answer?

PLAYING WITH THE NARRATIVES – AN AZERBAIJANI TALE

I believe that Turkey’s reaction to the EU is in several ways comparable to that of Azerbaijan. Let me emphasise that the similarities exist not in the nature of the regimes, but in the (foreign) policy strategies applied by both the Azerbaijani and increasingly also by the Turkish government. These governments are starting to use the same diplomatic tools as the EU to advocate their interests in international relations and are becoming more assertive in 1) defending their own policies; 2) reacting to EU criticism; 3) acting pro-actively and try influence relations with the EU.

First, the Turkish president has complained about foreign, including EU, ‘interference in domestic affairs’, an expression used to politely clarify that they don’t need any help with the ‘cleansing’ operation. Any potential criticism is undermined in advance by pointing out (possibly flawed) comparisons to policies within the EU –  for instance that France has also installed a state of emergency. The Azerbaijani government under Aliyev engages this strategy too, especially when it comes to human rights issues.

Second, the Turkish president has gone a step further by spinning the narrative around, and in turn accusing the West of supporting the coup attempt. Brussels and other European capitals would furthermore be doing so indirectly by condemning the government’s call for demonstrations in Member States. In sum, this turning of the narrative -a much-liked strategy of Aliyev too – thus catches two birds with one stone: denouncing external criticism, and criticising the critics themselves. 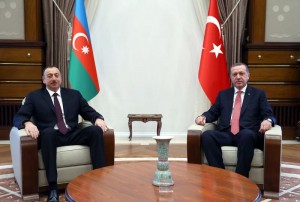 PLAYING WITH THE NEW KIDS

Of course this strategy is not unique for Turkey and Azerbaijan: for instance, Russia and Egypt have responded in similar ways to EU criticism before – these reactions should therefore also be seen in a broader context of contestation. Yet what makes these two cases remarkable is that Ankara and Baku have for a long time been considered close allies in the region, who had a favourable attitude towards Europe and the West more broadly.

But both Ankara and Baku now explicitly question this previously uncontested co-operation. Having alternative alliances available significantly increases one’s bargaining power. This is a second main similarity in their foreign policy strategies.

Azerbaijan has had such multi-vectored policy ever since the 1990s, when the then-president Heydar Aliyev installed a foreign policy of ‘balancing’ between the big regional powers, to ensure Azerbaijan’s independence. Being considered the ‘little brother’ of Turkey, such policy made full sense for a relatively small and young state. What is new, however, is the way in which the regime plays out this availability of alternatives in negotiations with the EU. This, again, can be seen in light of the growing assertiveness of the country’s establishment – and is at the same time probably a logical consequence of changing regional power dynamics, with the EU becoming a less appealing partner while other actors in the region, such as Russia or Iran, are rapidly gaining strength and appeal.

Turkey, likewise, has always had strong connections to the region and for several years seemed to profile itself as a bridge between West and East. But in the last few weeks, this foreign policy is presented in a more hostile way, as a turn against the West and towards the East. Whether or not this is a feasible option for Turkey, remains unclear. After all, ties between Turkey and the EU cannot be overlooked that simply. Rather, it seems part of a reactionary discourse, a form of resistance to practices of the past decades whereby the EU would take the lead in setting the agenda on cooperation. By turning away from the friendly discourse towards Europe and through rapprochement with notably Russia, Turkey makes a statement about its own independence, and against dominance of European agenda-setting.

This assertiveness will be played out on different levels. Meetings with president Putin, but also setting an ultimatum about the Migration Deal, are expressions of this policy strategy. Turkey is now showing its growing bargaining power and its increased self-awareness in full. It tries to signal that roles have been changed: The EU can no longer tell Turkey what to do. 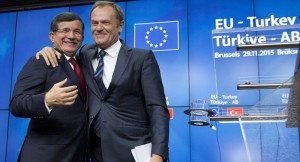 The EU and Turkey in happier times, when the Migration Deal was agreed, in March this year. Source: SputnikNews

SO (HOW) SHOULD THE EU RESPOND?

Different EU, Member State, and scholarly views on how the EU should act in regards to Turkey, again seem to come down to the values-versus-pragmatism debate – a debate to which there is no answer, and which is highly political in itself. There seem to be several considerations to take into account:

a)       There is a changing power dynamic going on in the region, whereby non-EU states are becoming increasingly powerful, but also assertive enough and sufficiently self-aware of their potential. There is increasing resistance to EU normative pressure.

b)      There are different extents to which these states capitalise on their resources and potential. So far, Azerbaijan was an outlier in the region, but Turkey under AKP leadership is catching up with this move quickly and, as has been shown above, has now also started to apply similar strategies in its foreign policy to undermine EU criticism and to enforce its own bargaining position.

c)       In Turkey, the EU has significant strategic interests. Often mentioned are trade, geostrategic and security considerations (Turkey being a member of NATO, an ally in a volatile region, supporting the so-called ‘international coalition’ against ISIS) and the recent Migration Deal. But let’s not overlook special relations concerning movement of people (both ways), and most importantly, the fact that values promotion could also be a vital interests of the EU in the case of Turkey. Since the country is in the accession process with the EU, its success or failure will set an example for others but also reinforce or undermine internal legitimacy of the EU itself.

d)      The EU’s selective trade-offs between values and pragmatism do not help its credibility or legitimacy. Long-term, broader, considerations will certainly play a role in determining the EU’s reaction to developments in Turkey.

e)      Lastly, in the case of Azerbaijan, the EU has seemingly chosen a middle ground by not choosing at all. There are clear elements of values promotion in policies vis-à-vis Baku, but these have been systematically ignored or undermined by the authorities; which would be very likely the case in Turkey, too, if the EU were to install stronger measures on issues such as political prisoners, capital punishment, freedom of media and organisation. The result in Azerbaijan is a strange status quo limbo with which both sides seem relatively happy for now – the question is if such situation would suffice for the EU in relations with Turkey, as there is possibly more at stake.

No policy decision towards Turkey will be the right one – possibly, the EU will once again end up in a lengthy reactive process with ad hoc decisions.

The question of the EU’s response is nevertheless still worth asking, because it is an issue of a much larger scale which reaches well beyond relations with Turkey. The EU cannot overlook the fact that more and more countries in the region are standing up against the EU’s top-down attitude and its exclusive policies. A more pro-active strategy to deal with changing power dynamics in the region seems needed (and the June Global Strategy won’t do it).

This may require more controversial policy choices, such as more inclusive forms of policy-making together with the current Turkish regime. On the other hand, such rather pragmatic approach will be subject to heavy criticism and will undoubtedly raise questions about the EU’s own legitimacy. No one may want to or can afford to burn their hands on this.

Unfortunately, the EU’s dilemma in relations with Azerbaijan therefore now seems to be applied to Turkey too: Brussels is caught between a rock and a hard stone. But they’d better try to get out of that position, soon.

Much gratitude goes to Igor Merheim-Eyre and Zhouchen Mao for their comments and suggestions for this post.