[This post was originally published in the Atlantic Community.]

Saturday, July 8th, 2017 marked the first anniversary of the Joint Declaration by the President of the European Council, the President of the European Commission, and the Secretary General of NATO. The signing of this joint declaration between the EU and the Atlantic Alliance called for a new era of their relationship. But is the Joint Declaration really such a milestone that everybody in Brussels talks about? Or, is it just another act of nothing?

Even in the area of security and defense, cooperation has become an unavoidable issue in the last twenty-five years. States in Europe have not only recognized the need for closer collaboration, but have also come to realize that there is no alternative. Recent events, such as the Ukraine crisis and the renewed disputes with Russia, the refugee crisis, and the emergence of hybrid warfare as well as terrorist attacks in European capitals, have illustrated that one security organization alone is not able to solve such issues. The changing international order and the developments along Europe’s borders call for more cooperative approaches to peace and security. 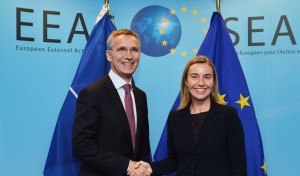 With the EU-NATO Joint Declaration, another stone was laid to build a basis for cooperation. One year has passed since the signing. The main questions are now:

Yet, while these proposals sound promising and let one think that the EU-NATO cooperation has moved from “desirable” to “possible,” one important question remains: What has been achieved so far? Of course, their cooperation cannot be expected to have become the goody-goody among inter-organizational relations in security and defense only one year after signing this declaration. But the current “European defense momentum” should be used effectively and wisely, and should be translated into closer cooperation over the Atlantic. Fruitful grounds for doing so are hybrid warfare and cyber security. These fairly new security threats can trigger cooperation through using each organization’s own strength – for example, cooperation in hybrid warfare , in which each can make use of their strength and expertise, could become a good point of departure and a potential for a spill-over effect to other areas of cooperation, such as cyber security and defense capabilities.

Still, one has to be realistic and down to earth in terms of EU-NATO cooperation in general. Since signing the Joint Declaration, one major concern remains: Both organizations could take the easy way out and rest on their laurels. As pointed out by a NATO official, both organizations have to deliver now. Concrete and substantive deliverables are urgently needed. Just ticking the boxes of carrying out meetings and seminars is not enough. The “joint” is still missing from their actions and both have to work towards a sense of togetherness on both the operational and strategic levels in order to find solutions to current security threats on Europe’s eastern and southern borders.

Overall, the atmosphere between the two organizations and their staff has improved over the last months and weeks. Exchanges have become more regular, and issues of EU-NATO cooperation more frequently find their way on the organizations’ agendas. The future for their relationship looks promising, albeit full of obstacles and challenges, and a lot of work still needs to be done. The EU and NATO find themselves in the “friend zone” and should work towards more strategic partners with a sense of togetherness.

Areas of cooperation that seem to be most fruitful for joint actions are cyber security and hybrid warfare, as well as counter-terrorism and maritime security. Efforts in the Gulf of Aden and in Mediterranean Sea have illustrated that cooperation on the operational level is possible. Now it is time to translate the will to cooperate to other theatres. Crises in the Ukraine and Libya demand joint action because of the complex nature of these enduring conflicts. Neither organization is fully equipped to deal with these issues. However, questions still remain. Who will make the first move? Who dares to actually start cooperating on both the operational and strategic level? The implementation of the Joint Declaration and the 42 proposals remains to be seen.

Teaching European Studies in Times of Brexit | Renewal of the EU-NATO relationship because of Russia? | NATO, Trump and Turkey: The Alliance needs more coherence | What lessons learned from the Munich Security Conference? by Nele Marianne Ewers-Peters | 'Brexit’s Implications for the EU’s relations with international organisations' by Nele Ewers-Peters |

Happy birthday, EU NATO Declaration! All the best for your future | ‘The European Union has lost its creativity: We need a new vision of Europe’ by Igor Merheim-Eyre | “Turkish and Azerbaijani foreign policy strategies of resistance to the EU”, by Eske van Gils | ‘Chaotic Turkey, paralysed NATO, lead-taking EU?!’ by Nele Ewers-Peters | Brexit and the Football Euro Cup – Chaos in the Making? |