This year’s Munich Security Conference took place under the theme ‘Post-Truth, Post-West, Post-Order?’ and hoped to steer the direction of politicians and policy-makers into facing the wave of fake news and fake facts. Originally, the purpose of the Munich Security Conference is for senior politicians, diplomats and military experts to discuss current issues in the field of security and defence. The agenda sounded promising, especially for those interested in the future of the Atlantic Alliance, politics of the West and EU-US relations. If you looked for discussions on pressing and highly important security and defence issues, you were in the wrong place.

Speeches and roundtable discussions by the representatives of the most powerful states reflected the same blah-blah as every year. It was the first performance by the newly formed US administration represented by a delegation around Vice-President Michael Richard Pence, Secretary of Defence James Mattis and Senator John McCain. All three US representatives stressed the importance of NATO, the United States’ commitment to collective defence and to the transatlantic partnership. Mattis criticised the European allies for the lack of commitment terms of defence spending and Pence especially demanded an increased contribution by France, Germany and Italy.

As a reaction, German minister of defence, Ursula von der Leyen, called for a more ‘responsibly minded America’ and demanded that Europe should not always rely on the United States, instead it should be responsible for itself in these times of uncertainty. Newly appointed Sigmar Gabriel – it seems on behalf of the European allies – proclaimed that ‘we must not leave Europe to those who want to destroy it’.

While these speeches and calls sound all too promising and appealing in times of uncertainty, populism and increasing crises in and around Europe, these talks have not changed. And, what are the results? It is the same procedure as every year. It is the same rhetoric and the same lack of concrete measures and actions. 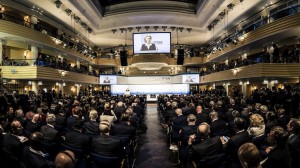 What the main criticism here is that, while the Munich Security Conference is supposed to be a forum to discuss and find solutions of crises and conflicts, the most pressing ones have been neglected and pushed towards the end of the agenda. The main talks circulated around new US administration under Donald Trump – despite his absence – and how ‘obsolete’ NATO might be. More urgent security issues have not been touched upon, such as, above all, how to deal with the increasing authoritarian style of government in Turkey under Recep Tayyip Erdogan, the next crises lurking in South Sudan and the Central African Republic, and how to actually solve still ongoing crises and conflicts in Eastern Europe (Ukraine and Russia), the Middle East (Iraq, Syria) as well as in North and Sub-Saharan Africa (migration, migration, human rights violations).

In addition, there was not much talk about the future of the relations of the West with Russia, which is severely needed to tackle some of these issues. Russian foreign minister Sergey Lavrov called NATO an institution of the Cold War era and demanded a post-West world order because he sees the West as outdated. It is time for NATO to finally get hands on, and get to grips with the increased aggression by Russia and thus to ‘rethink Russia’.

Almost all speakers called for unity and cohesion, but, as finally vocalised by Anne Applebaum in her article for the Washington Post, what has been forgotten was ‘that one of the gravest dangers facing the Western alliance is the president of the United States’. So, one thing that the Munich Security Conference has shown, however, is how representatives of the current US administration have to carry the can for what their president is not capable of: doing politics.

Then, what to make of all of this? Europe needs to rethink itself. It is slowly realising that the United States as a reliant partner in foreign, security and defence policy is slowly ceasing under the current administration. NATO is not ‘obsolete’, although it is obviously an institution from the Cold War era. Thanks to Secretary General Jens Stoltenberg’s realistic assessment, NATO needs to adopt not only to the external security environment and the current security challenges, but also to the internal changes and (security) challenges. Increased defence spending is one thing, but willingness, ideological commitment to the alliance’s core values and actually taking action to address there threats and challenges is another.

It is about time to go beyond all this rhetoric and to deal with the current security challenges and threats that North America and Europe are facing.

Nele Marianne Ewers-Peters is a PhD Candidate and Teaching Assistant at the University of Kent and a Visiting Scholar at KU Leuven.

Teaching European Studies in Times of Brexit | Renewal of the EU-NATO relationship because of Russia? | Happy birthday, EU NATO Declaration! All the best for your future | NATO, Trump and Turkey: The Alliance needs more coherence | 'Brexit’s Implications for the EU’s relations with international organisations' by Nele Ewers-Peters |

What lessons learned from the Munich Security Conference? by Nele Marianne Ewers-Peters | ‘The European Union has lost its creativity: We need a new vision of Europe’ by Igor Merheim-Eyre | “Turkish and Azerbaijani foreign policy strategies of resistance to the EU”, by Eske van Gils | ‘Chaotic Turkey, paralysed NATO, lead-taking EU?!’ by Nele Ewers-Peters | Brexit and the Football Euro Cup – Chaos in the Making? |