Can and should NATO learn from the EU?

When a group within the Turkish military attempted a coup to overthrow the current government under the leadership of Recep Tayyip Erdoğan and his Justice and Development Party (AKP) last Friday, the world knew that chaotic times will be ahead. This was however not the first coup d’état in Turkish history. While Erdoğan is now ‘able to do whatever he wants’ and working on restoring his power in Turkey, it would be interesting to see how the international community deals with the country. And even more striking would be to see and hear the reactions by the two organisations most important for Turkey, NATO and the EU. The lack of NATO’s responses and measures suggest that it may have to learn a lesson from its counterpart, the EU. 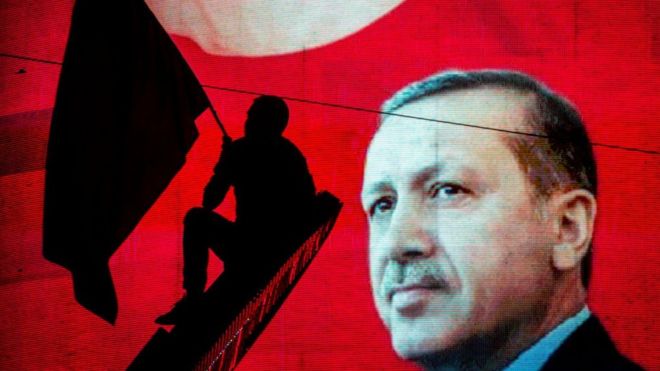 The international community has responded to the events in Ankara and Istanbul immediately after the clashes: UN Secretary General Ban-Ki Moon called for calm, US President Barack Obama demanded to Turkey to support its democratic institutions, German Federal Foreign Minister Frank-Walter Steinmeier condemned the attacks in Turkey, and even the newly elected British Foreign Secretary Boris Johnson expressed his concerns about the situation unfolding in Turkey.

European Council President Donal Tusk called for a return to constitutional order and Frederica Mogherini, the EU’s High Representative for Foreign and Security Policy, warned the Turkish government to take steps against the constitutional order and said that the rule of law needs to be protected, but another voice remained rather neglected. NATO Secretary General Jens Stoltenberg did condemn the occurrences in Turkey, but solely called for calm and restraint.

Whereas the EU takes the lead in criticising the Turkish government and Erdoğan’s reaction after the failed coup, NATO seems to be impotent. The EU has the necessary instruments to sanction Turkey at its disposal: economic sanctions, suspending visa liberation and EU accession negotiations, and it could even withdraw the country’s candidate status. Following Frederica Mogherini, ‘no country can become an EU member state if it introduces death penalty’. NATO, on the other hand, is not indifferent or stunned, but it does not possess any sanction instruments vis-à-vis its member states. But saying that NATO is paralysed would do the alliance wrong. According to the North Atlantic Treaty, it cannot interfere in a member states’ domestic politics. As a reaction, US Secretary of State John Kerry therefore stated that NATO will nevertheless observe closely the events in Turkey and that the Alliance ‘has a requirement with respect to democracy and NATO will indeed measure very carefully what is happening’.

Gauging the measures at disposal of the EU and NATO leads to the question whether the Alliance could and should learn from the EU in regard to treating (candidate) member states. Since NATO has evolved over the past decades and transformed from a military alliance to, what Wallander and Keohane have coined, a ‘security management institution’, it has acquired a much broader political dimension than initially anticipated. So far NATO has not recorded any incidences in which it was forced to interfere in the domestic affairs of one of its member states. Yet, the alliance is founded on democratic principles and has committed itself to democratic values and norms; this counts for both candidate states and allies within the organisation.

The country at the Bosporus is a vital ally, however, and should not be just suspended or kicked out as suggested by John Kerry. Rather, suspension should go hand in hand with additional measures. In any way, Turkey plays a strategic not only for NATO but also for the EU – it borders both Syria and Iraq, and is therefore a vital ally in the fight of terrorist threats. Hence, not only the EU, but maybe even more importantly, NATO and its allies should take stricter measures to urge Turkey to return to constitutional order.

Nele Marianne Ewers-Peters is a PhD Candidate and Teaching Assistant at the University of Kent, Canterbury.